After a prolonged safety exchange O'Sullivan, hampered by the green, drains a lovely long red into the bottom right. He can only add a blue though before running out of position and playing safe.

O'Neill then responds with a superb long red of his own, and gets position on the right side of the blue. He's flowing now, and this is a chance to get back into the match.

This one's over as O'Sullivan drains a long red and adds 19 in total to take the second frame. O'Sullivan gets the better of a safety exchange, forcing a mistake from O'Neill who leaves him a red to the left middle from the bottom cushion.

In the blink of an eye O'Sullivan gets to 40, but will need two of the five remaining reds which are a bit awkward. He pots one, but can't land on the second; it's end of break on 47 but O'Sullivan lands O'Neill in a full ball snooker behind the yellow as his parting shot.

The first chance of the second frame falls to O'Sullivan, as O'Neill tries to play safe off the pack and drop in behind the black, but leaves the white too far from the bottom cushion and with a red on to the right middle.

O'Sullivan can only make nine though before losing position on the black and playing safe. O'Sullivan dispatches a half century which takes him past the winning post in this frame.

He ultimately makes 60 before missing a double on a red, and O'Neill concedes. O'Neill puts 30 together, but loses control of the white when stunning into the pack off the blue, leaving himself marooned on the bottom cushion.

He tries an ambitious thin cut to the left middle but rolls the red out off the knuckles, and leaves it for Ronnie into the same pocket.

This is a gift chance for the world champion. The boys are baized, and we're underway. O'Sullivan immediately draws ten points in fouls after trapping O'Neill behind he green for a full ball snooker.

Ronnie then misses a long red to the bottom right, but O'Neill then fails to cut the offending ball into the same pocket. That's gifted O'Sullivan an easy starter, and he's away; he can only make 14 though, inclusive of a stunning blue to the green pocket, and he's left O'Neill in.

Well probably on O'Sullivan, given that he's the world champion and Jamie O'Neill is the world number This is best of seven though, a format in which O'Sullivan has suffered a couple of upsets so far in Milton Keynes this season.

He'll be jonesing to win the Northern Ireland Open though; the Rocket has lost the last two finals in the tournament to Judd Trump.

He's in a philosophical mood in his interview with Alan McManus. Yes, he's missing the variety of venues that the tour normally offers, and the crowds; but, like we all must, he accepts that this is what this is and he's thankful to be able to play.

Join us in half an hour, 6t. That second one, especially, should be a belter. He says the table was quite heavy, and because he knew Filipiak wasn't going to punish him, his level dropped. 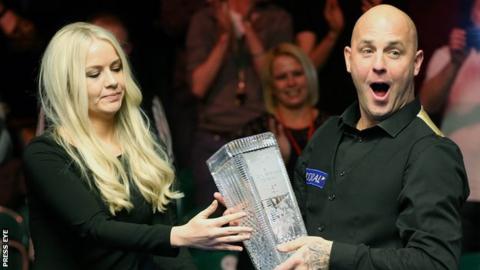